*** I am selling my Canon 500 mm Image Stabilized lens.  The new ones have a recommended retail price of $8,400.  As you know my used one takes a mean photo and you can have it for $4,500,  Contact me if you are looking for a lens.  It comes with the neopreme, camoflage cover plus that incredible Canon case and lens cover.

Click in the upper right area of a photo to make it open in a larger, sharper format.  Then you can advance through them like a slide show.

In less than 90 days, I will be hosting a hummingbird photography workshop at the Barnhart Ranch and Nature Retreat between Beeville and Goliad, Texas.  Last fall, hummers were swarming at the ranch in late September, so we are counting on a repeat performance.  If you haven’t done hummingbirds with 5 high-speed flashes, you haven’t really done hummingbirds.  We will be capturing their crazy antics and in-flight hijinx at about 1/16,000 of a second.

If you want to join me for the hummingbird workshop, just click on my website (www.larryditto.com), then click on “photo tours” and check out the details.  Of course, you can skip that part and email me.  I will send you some details for the September 23-23 workshop.

These oriole photos were shot from atop a scaffold about 10′ off the ground using a Canon 1D Mark III camera, 500 mm IS Canon lens mounted on a Wimberley head atop a Carbon Fiber Gitzo tripod.  On the flight shot, I prefocused a foot in front of the nest and shot at about 1/2000 second to capture the bird in focus as if flew away from the nest.
For the oriole perch shot, I used a little fill flash set at -2 2/3 f stops of power on a Canon flash with a “Better Beamer” attached.
Besides orioles, I’ve been shooting at the Santa Clara Ranch photography blinds.  You will note the stark appearance of the backgrounds; until this week, it had only rained .1″ in the last three months.  The brush had shed its leaves to conserve water.  In recent days, the ranch has had a 1″ rain and more is falling today, so the brush will be green and blooming for awhile.  Here are some recent wildlife shots from the Santa Clara:
It takes a lot of shots to get birds landing with the wings spread and everything in focus.  This photo was done with a 500 mm lens, but something with less telephoto power works better so that you can have some cropping space around the bird.  I prefocused on the perch and began shooting at 10 frames/second as the bird approached.
This courship feeding ritual is much prettier with the birds on a tree branch with colorful blooms in the background.  I was fortunate to get the shot at all and there are no pretty perches around the ranch this summer.  Instead, birds are doing what they do at the ponds
Buff-bellied hummingbirds show up occasionally at the the Barnhart Ranch, so we will be looking for some variety while shooting there in September.  Rufus, black-chinned, ruby-throated and buff-bellied hummingbirds could be in the mix.  The workshop is half full (we are only taking 4 shooters on this one), so sign up soon.
See you next week,
Larry

I’ve been shooting close to home for the past couple of weeks.  Last week, I was at the National Audubon Society Sabal Palm Sanctuary looking for a rare masked duck…saw it but couldn’t get close.  This week, I have photographed a pair of altamira orioles going to and from their nest.  Some of those shots were ok, but the background was busy.  We raised our scaffold to eye-level, so I expect the next shoot to be very productive.

I am ordering a few cold-weather apparel items for this fall’s Bosque del Apache Photo Tour.  Let me know if you would like to go.  Bosque is a fabulous photo location in  November-December.

Earlier today, I tried ordering a Canon Flash Booster and discovered it is another of the items we can’t get right now because supplies were interrupted by the tsunami.  My old flash booster with the 2 lb. battery gave up the ghost.  It was not a Canon brand item and was way too bulky to suit me.  I hear great things about the Canon booster which just requires 8 AA batteries.

Here are a couple of shots from the south Texas area.  Click in the upper right portion of the photos to enlarge them and to get a sharper, brighter image.

Those palms (above) overhanging the Palm Sanctuary’s entrance road are native Sabal Palms.  That grove is one of the few sites remaining in south Texas where the palms have not been cleared.  Several conservation organizations and the U.S. Fish and Wildlife Service are restoring other sites to palms.  There are also resacas (ox bows) of the Rio Grande on the Sanctuary which provide habitat for many birds and other wildlife.
If you can take the heat, this is a great time to be at the south Texas photo ranches…
Have a good week in the field!
Larry

As many of you know, I consult with ranchers who are considering commercial photography operations, thus I spent this past weekend visiting the Selman Ranch at Woodward, Oklahoma and the Coffman Ranch on Quartz Mountain at Granite, Oklahoma.  Both have tremendous potential!

The Selman Ranch has lesser prairie chickens and many other species including redheaded woodpecker, belted kingfisher, gray fox, Harris’s sparrow.  While Sue Selman, some neighboring ranchers and I visited a potential photo blind site, a pair of redheaded woodpeckers were active at a nest cavity about 8 feet off the ground in a dead cottonwood.  I can’t tell you how I was wishing for my camera and tripod.  The nest location was ideal.

At the Coffman Ranch, I was introduced to beautiful granite mountains with huge boulders and a population of collared lizards the locals call “mountain boomers”.  In the spring and early summer, the male lizard (about 15″ long) is tourquois colored with an orange head.  They were magnificant, numerous and approachable.  Robert Coffman’s ranch has numerous small ponds and scattered groves of mesquite, post oak, and hackberry.  He is in the process of developing a bird list, but we saw black-chinned hummingbird, Bewick’s wren, yellow-billed cuckoo, wild turkey and painted bunting.  Robert has plans for a blind on one pond where hooded mergansers winter consistently, so I’m hoping to return this winter!

The ranches have ample accommodations for photographers and they will do the cooking.  Sue is quite a chef and Robert makes the same claim, ha.  Actually, we had a great fish fry one evening and a hearty breakfast the next morning, so photographers won’t leave either ranch suffering from weight loss.

There wasn’t much time for photography during the consultation, but here are some sample photos from these ranches.  Once their blinds are in place, I will put together a trip and invite you to join me.

Click in the upper right portion of any photo to see it in a larger, sharper format and to advance from one photo to the next.

I haven’t determined the species of this cactus, but it was abundant at the Coffman Ranch and grew in large colonies on the granite mountain.  This shot is at sunrise before the cactus blooms opened.  The photo was taken with a Canon 1D Mark III and 16-35 mm lens on Arca Swiss monoball and Gitzo 1348 cf tripod from ground level.  I always wear knee and elbow pads for this type of photography. 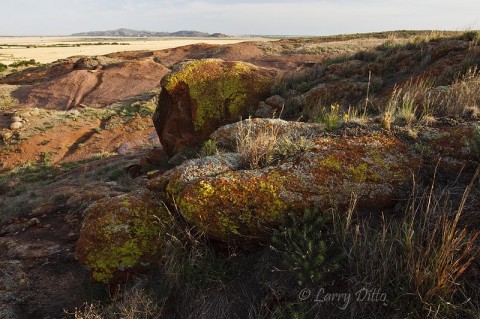 Granite outcroppings and lichens on Quartz Mountain at the Coffman Ranch.

Quartz Mountain on the Coffman Ranch lies at the west end of a range of granite peaks that extend from the Wichita Mountains near Lawton to Granite, Oklahoma, a distance of approximately 60 miles.
The Selman Ranch has a lesser prairie chicken lek where photographers sit close enough to capture great action at sunrise from late March to May.  Occasionally, a male ring-necked pheasant (below) will arrive at the lek before daylight to battle the male chickens.  Although confused about his species identity, this bird provided a nice photo opportunity for us as we awaited sunrise in our pop-up blinds at the edge of the lek. 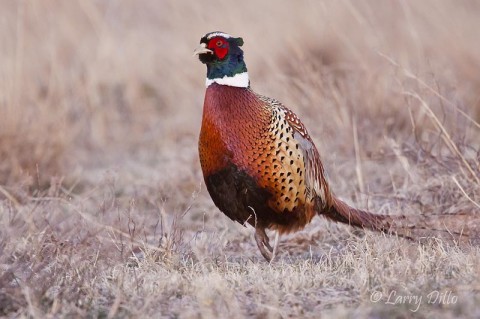 Ring-necked Pheasant who thinks he is a lesser prairie chicken.

The pheasant shot was done before sunrise with the 1D Mark III Canon camera and 500 mm IS Canon lens on a Wimberley head and Gitzo 1348 cf tripod from a Cabelas popup blind.

I will be working at some of the south Texas sites this coming week, trying to capture nesting altamira oriole, red-crowned parrots and masked duck.  Wish me luck.