On August 17-18, I guided a group of photographers into a remote part of west Texas known as the Christmas Mountains.  The trip was a pre-festival event for the Davis Mountains Hummingbird Festival and we were after Lucifer Hummingbirds.  I hope  to  lead more trips in the coming year in May and August.  This one filled up the first day it was advertised, so let me know early if you are interested.

August is also the west Texas monsoon season and many species of hummingbirds begin heading south into Texas from the Rockies further north.  So, the festival is scheduled to take advantage of the many hummers moving into the Fort Davis area.  After my workshop, I stayed around to check out some of the festival events  and presented the keynote talk on the closing evening of the festival.

*** Important news on used cameras.  McAllen, Texas photographer Paul Denman (pmdenman@att.net) would like to make you  a great deal on his Canon 5D Mark III camera with grip and extra batteries as well as a Canon 1D Mark IV with extra batteries.  Go ahead and contact him directly to get more information and discuss prices.

Here are a few images from the west Texas trip:

Don’t forget to click on an image to make it larger and sharper for viewing. 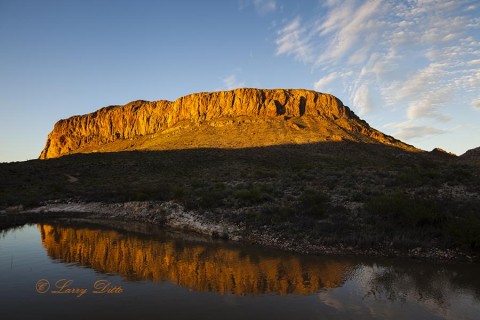 At the base of this butte in the Christmas Mountains west of Big Bend National Park, Lucifer Hummingbirds nest in cholla cactus each spring and summer.  It’s doesn’t look like hummingbird nesting habit, but there they are.  We photographed them at feeders within a quarter mile of this mountain.

Sunset light on the Christmas Mountains can produce some excellent scenic views.

Both of the above Lucifer shots were with Canon 7D Mark II and Canon 500 mm lens mounted on Wimberley head and Gitzo 1348 tripod.

This male is moulting but still sports a striking plumage.  Four flashes were used for this photo to light the bird and background.

Keep watching for a few more images from the Davis Mountains.