It is still very dry in south Texas, but we have had enough rain to make the brush leaf out and a few wildflowers are blooming.  Most notable among the south Texas wildflowers is lantana which grows in clumps with clusters of small orange flowers.

For the photo below, I placed a perch in front of the lantana and provided some seeds to attract the birds.  This olive sparrow was the first to arrive.  Olive sparrows are residents of south Texas and Mexico and are seldom seen in the U.S. except in the lower Rio Grande counties.

Remember, you can view these photos in a larger, sharper format by clicking on the photo.  Move your cursor to the upper righthand portion of each shot to find the advance button. 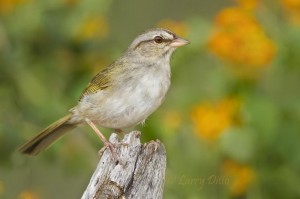 Olive Sparrow and lantana at the Santa Clara Ranch west of Edinburg, Texas.

When you want to add color to a photo, try this technique.  I recommend either putting the perch among the flowers so that they are identifiable or placing the perch well in front of the flowers so that only their color appears as a background.  I set this perch for another photographer and it was much too close to the flowers for my taste.  I did some blurring of the background in Photoshop, but it works better to move the perch even farther away to smooth the appearance of the greenery.  That is more easily accomplished with a large telephoto lens.

This common ground-dove feeding amoung small composite wildflowers is an example of placing the subject among the color rather than well in front of it.  The flowers become a part of the subject.

I was on the ground when this big gobbler strolled by.  A friend slammed the truck door while I was focused on the bird and, as expected, the turkey gobbled.

A heavy fog was lifting one morning last week when I captured this photo.  The wet flowers and grass had soaked the tips of this gobbler’s tail feathers.

I got this photo from ground level using a Gitzo cf tripod, Wimberly head, Canon 7D camera and Canon IS 500 mm lens.  In Photoshop, I toned down the sky to provide a nice contrasting background to the tail without being overly white and distracting.

This is one of the few, really sharp photos of this mating sequence (about 150 frames).  We drove up on this scene and I eased out the passenger side of the truck with the 7D and 500 mm lens.  I hastily moved to a fence post and used it for support.  As it turned out, the turkeys were preoccupied and didn’t seem to notice me.  I should have grabbed the tripod from the back of the truck.

Golden-fronted woodpeckers were fairly active in recent weeks.  By anticipating this guy’s flight path, I was able to capture a fairly sharp action photo.  Below are other birds and such made recently.

Three of us were patiently waiting for this white-tailed hawk to land on a baited perch.  Instead, it slipped in from the side for a fly-by but, fortunately, graced us with one look back.

Redhead ducks began leaving the Laguna Madre in recent days.  I had  three or four wonderful days in late winter and early spring photographing them in flight.  These photos are all take-off shots.

The photo above was really tough for the auto-focus lens.  Fortunately, the sensor acquired the male redhead  that was slightly above and near the front of the flock.  It made for a nice composition.  Mostly, I like the action conveyed by the splashing water and raised wings.

Finally, I offer this shot of a chicken and buck white-tailed deer sharing breakfast at the rancher’s trough.  Judging from the look in the buck’s eye, the rooster rules the roost.

I hope to meet some of you in the field real soon,