I just wanted to post a few images I got last week on a resaca (oxbow) near Brownsville.  It seems there is always something good to photograph, even in the hottest part of the summer.  I was surprised that none of these birds showed serious signs of molting.

Remember, you can click on an image to enlarge and sharpen it.  Clicking on the right edge of a photo will show you how to advance to the next image.

Ducks like to perch and remain motionless for long periods but photographer patience will pay off.  The ducks have to stretch or fly every little while.

I waited two hours for a green kingfisher to fly on to this perch.  The nice head tilt came while she was looking upward for avian predators.

Grebes have to stretch, shake off excess water, and move around.  They don’t seem to have the patience for sitting and resting.  That great background color is sunset light bouncing off the resaca.

My annual Instructional Photo Tour to the Big Bend National Park during late March and early April this year was the best ever.  Because of exceptional rainfall winter rains, the park was abloom and flush with color.  Many who have visited or worked in the park agree that this spring bloom was a once-in-10-years event.

Take a look at the photos which follow and note the color explosion which we haven’t seen in past trips.   Don’t forget to click on the right edge of a photograph to increase the size and sharpness for better viewing.

The scene above greeted us as we prepared to cross the Pecos River at the upper end of Amistad Reservoir.  After stopping at the overlook for a leg stretch, I spotted red cactus blooms along the cliff below.  One hour later, after thoroughly photographing the landscape, we were back in the car and headed west.

I decided to add a touch of “canvas” to the background on this image.  The Photoshop filters offer some exciting options to get the most from a print.  This image was a little north of Castolon Store in Big Bend Natl. Park.

I think I was sitting in some dead dog cactus while shooting this photo at nearly ground level.  Sometimes I get caught up in the moment and forget to inspect the ground closely before getting in close to the subject.

It’s a 5 mile round trip from the highway to Dog Canyon in the northern part of the park.  The photography group loved the hike, the wildflowers and the cliffs.

The Chisos Basin “window” is always our first planned photo stop in the park.  When clouds are present, the window is always exceptional during sunset. 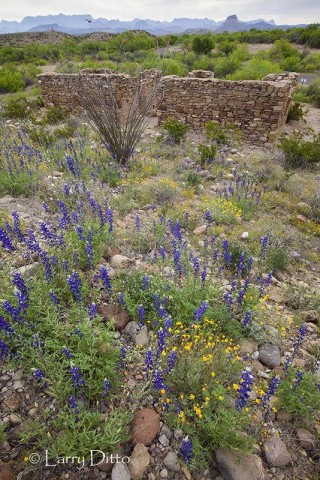 Bluebonnets added a lot of nice color this view of ruins near Cottonwood Campground looking north to the Chisos Mountains.

One of my favorite views of the Rio Grande as it turns toward the Boquillas rim at sunset.

We just had to stop for one (or was it 50) more wildflower photo  before exiting the park after 4 fantastic days.  The sun was just coming up as we unlimbered the tripods near Panther Junction and the Chisos Mountains.

Finally, I got time to sit down and look through this season’s images from the Block Creek Natural Area during late April.  They had a lot of rain this year, so the timing of bird nesting and things like that were a little off.  Nevertheless, we had a great week with two groups of photographers, back to back.  I’ve got a bunch of images to show you a sample of what the group got, so let’s get to it.

Don’t forget, clicking on an image will give you the enlarged and sharpened view.

The first things I noticed when I arrived the day before our photographers was that the barn had been painted and the entrance road had a new surface.  The big oaks in the back yard provided the perfect frame for the barn.

Larry and Sharron Jay had lots of fresh flowers in the greenhouse and throughout the grounds.

The Last Chance Forever folks brought a variety of owls and hawks to the Block Creek Natural Area to educate our photographers and to use as subjects for a morning photography session.

I was experimenting with the HDR Toning component of Photoshop and discovered that it can help make some photos much more fun to see than when they are processed “normally”.  The rooster below was one of the most colorful birds I’d ever seen so I couldn’t help but boost the colors into another level.

This woodpecker was hanging upside down while working on this dead oak branch.  I thought the shot would make more sense if rotated to a vertical pose.

Almost everyone in our group got shots of this beautiful male eastern bluebird.

So, we saw a lot and photographed most of it.  I did leave out some historic buildings we worked with just down the highway from Block Creek NA.  The area has a lot to offer outdoor photographers.