A few months back, some of you may recall that I was chattering more than usual about the photography opportunities at Transition Ranch near Uvalde, Texas.  During the dry spring of 2014, I helped the owners select photo blind locations and I showed them where to find golden-cheeked warblers and black-capped vireos.  After a few days at the ranch, I was really excited about the possibilities.  Then, when April arrived this year, the ranch was drenched with record amounts of rainfall.

Here are a few of the images I captured at Transition Ranch while guiding two groups of photographers at mid-month.   For best viewing, click on an image to enlarge and sharpen it.  Click on the right center of each image to advance through the images. 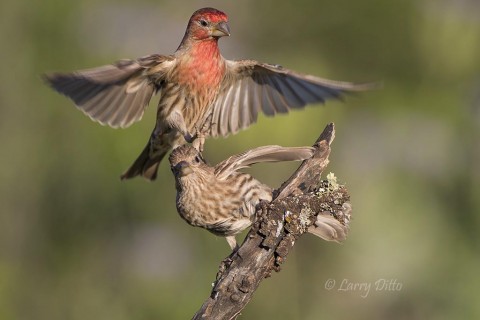 House Finches were abundant in spite of heavy rains.

Frequent rains through the winter and spring made it impossible to complete photo blinds for golden-cheeked warblers and black-capped vireos.  Although shy, they should come to water in this dry country during a normal spring and summer.

Some of our photographers got excellent photos of painted buntings and Montezuma quail.  I can’t wait for next year…may it be just a little drier.

I photographed this feeding American Oystercatcher and landing willet last winter in the Laguna Madre shortly after sunrise.  Of course,  water dripping from the bill or having the wings spread is really cool, but it’s the reflection that makes the image.

Click on the image to enlarge and sharpen for viewing. 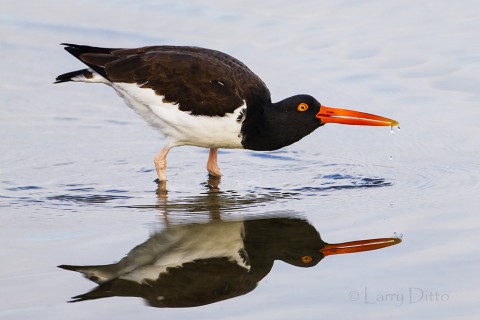 I am working my way through thousands of images collected through the winter and spring.  Keep watching for fresh newsletters with photos from Big Bend National Park, Block Creek Ranch, Transition Ranch and more.

I hope most of you take the Texas travel and outdoor magazines, “Texas Highways” and “Texas Parks & Wildlife”.  If so, you may have seen several of my photos in May and June.  It’s always a big thrill to be published, especially in magazines that do such outstanding work.  Look for the cover on the June issue of …Highways and several inside shots as well (the May issue has several, too).  The May issue of Parks & Wildlife included several bird photos for a story on the “The 12 Most Beautiful Birds in Texas”.

The following images come from some photography outings I led this past April in the Rockport and Galveston area for FeatherFest.com.  Many birders and photographers gather in Galveston each spring for the festival and what better place than Galveston to do it?

If you click on the photos, they will enlarge and sharpen for your viewing.  Advance through the slide show by clicking on the right edge of any image.

The pelican shots were made from a boat.  I was leading a group of 5 happy photographers who went home with thousands of nice shots of one of Texas’ most interesting birds.

This photo and the following bird photos were shot from a boat as we spent two days on the water with Captain Kevin Sims in a Pre-FeatherFest photo shoot.

Most of the colonial nesters need structure (brush, sunflowers, etc.) to support their above-ground nests.

The flower shot was done with a Canon 5D Mark II and 24-105 mm lens from ground level, hand held, 1/30 second @ f16, ISO 400.  By getting on the ground for this shot, I was able to get below a strong wind and capture a perspective most photographers pass by.