Last Wednesday, I headed for South Padre Island hoping to photograph some of the last of 2016’s spring migrant warblers.  It was just about the end of the migration but a handful of warblers, hummingbirds and catbirds were still resting and foraging in the Convention Center thicket.

These shots were made in the shadows at a water feature without the aid of photogenic perches.  Fortunately, the yellow birds exposed well, even on dead limbs.

Most of these photos were shot at 1/160th to 1/80th of a second; pretty slow but you work with what you find.

It was a tough afternoon, shooting into thick, shaded cover, but those yellow birds made my day.

Last week I had the pleasure of photographing for a few hours at the Christmas Mountains Oasis south of Alpine, Texas.  It’s a long way from “Nowhere”, but it is heaven for the birds.  Rare and beautiful Lucifer hummingbirds nest on the property and spend much of their time at the Oasis feeders.

A visit to the Oasis is by invitation only, so if you want to have a chance at Lucifer hummingbirds and many other species, sign up for my August 17-18 hummingbird photography workshop.  I’ll be posting the particulars on my website under the Photo Tours heading in the next day or two.  Eight slots were available and two are already taken.

Here are some images of the oasis and Lucifer hummingbirds:

These birds have long, curved beaks and, of course, the males have that incredible purple/pink/lavender…throat.  The above shots are in natural light and photographed with the Canon 7D mark II and 500 mm lens with Wimberly head and Feisol tripod.

Lucifer hummingbirds nest in cholla cactus near the top of this mountain.  Amazing!!

The last shot was done with the aid of multiple flashes and artificial background.  If you like stop-action hummingbird shots, you can appreciate this image made at about 1/12,000 of a second.  I’ll have the setup available at the Christmas Mountains Oasis Hummingbird Photography Workshop in August.  To register, contact the folks in charge of the Fort Davis Hummingbird Celebration at Fort Davis (info@fortdavis.com) or contact me by email at lditto@larryditto.com and I’ll get you hooked up.

Like last spring, the Texas hill country caught a lot of rain in April and the bird photography instructional photo tours endured a few overcast, cool and even drizzly days.  Nevertheless, we saw a lot of nice birds at Block Creek Natural Area (Turkey Hollow B&B) and at Transition Ranch near Uvalde.  I was at Transition all of last week with two groups of photographers  where we worked from photo blinds and by walking some of the roads bordered by wildflowers.

A dry spring will bring more birds to the waterholes and food at the blinds, but I think you will see some indications of the ranch’s potential in the following photos.

Remember to click on an image to enlarge and sharpen it for viewing.

Except for the image above, I used my 500 mm lens for virtually every shot.  This image was made with Canon 5D Mark II and 24-105 mm lens at f22 and tripod mounted. 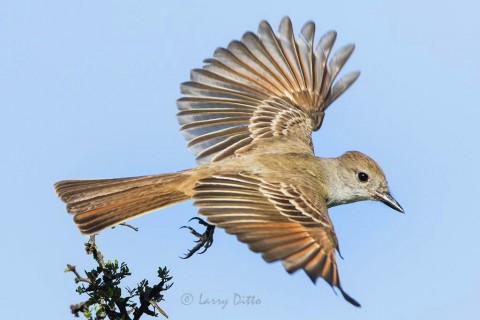 This ash-throated flycatcher was at the blind for only a moment.

The gray vireo above is pretty rare in the hill country but they can thrive in the diverse habitats of the Transition Ranch.

Blue grosbeaks were popping up everywhere during the last half of the week (around May 1).

Vermilion flycatchers are among the early nesters at Transition Ranch and one pair fledged their young while we were there in late April.

This pose of western scrub jay was one of my favorite shots of the week.  Slight head-turn makes the photo.

In a chattering contest between cactus wrens and yellow-breasted chats, it was a close call to name the winner.  They never let up.

Black-capped vireos are found throughout the ranch in abundant mixed thickets of scrubby oak, Texas persimmon and sumac.

These little guys love the juniper thickets of Transition Ranch.

As the days grow warmer and dryer, even more birds will find their way to the fresh water and food at the ranch’s photo blinds.  Like most south Texas ranches, the bird diversity is wonderful and the photo ops are abundant.