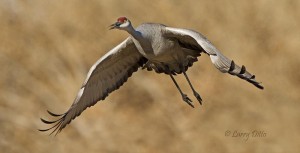 Last week, I traveled with four other photographers to Socorro, New Mexico and the Bosque del Apache National Wildlife Refuge for the annual Bosque Instructional Photo Tour.  With the exception of  the final afternoon when a strong wind kicked up ahead of a cold front, we enjoyed beautiful weather and had a blast photographing a variety of birds, mammals and landscapes.

The Bosque corn crop for wintering birds was far below normal production, so we anticipated problems getting snow goose photos.  Fortunately,  that was not the case.  The refuge staff opened a few extra miles of farm road for the visiting public and that got us in an area where the geese were feeding.  We were able to photograph many thousands of geese and sandhill cranes on each of our three days.

Next year, I anticipate hosting the usual three days at Bosque plus an additional two days photographing sand dunes and native American petroglyphs.  So mark your calendar for next November.  Meanwhile, here are some of this year’s captures.

Many of the flight photos I took were done at slow shutter speeds in the range of 1/60 to 1/100 second.  By panning with the bird, I was able to blur the wings and background while getting a reasonably sharp focus on the head.
One of the most difficult tasks in photographing cranes and geese is capturing a moment when a single bird is separated from the flock.  Getting that bird in a pleasing location with dramatic wing action is significantly more difficult, but at Bosque all things are possible to those who shoot, shoot, shoot.
Knowing “where to go and when to be there” is the great challenge at Bosque del Apache NWR, especially for first time photographers.  I always try to position my shooters to get sunset action like this sandhill crane landing at the roost.
Wing position is of utmost importance for a pleasing flight shot.  At Bosque, one always hopes for a southerly breeze when the birds are feeding.  We weren’t so lucky with wind direction this year, but by carefully positioning ourselves, we still captured some nice snow goose poses.
As usual, bald eagles were perched about the larger ponds, ever vigilant for a crippled or dead bird.  Getting a really good photo of these guys requires phenominal luck or a really BIG lens.  The following shot was done with a 500 mm lens and 1.4X telecoverter.  It looks ok in format, but I could have use more glass.
We spent a fourth day photographing petroglyphs east of Bosque del Apache Refuge.  Inspite of a spitting snow, we got some nice shots as darkness fell.  Join me next year for a petroglyph excursion after the refuge photo trip.
Bosque del Apache NWR is my favorite photo trip and it always offers something new.  I hope you enjoyed this little sample from the 7,000 images I made during five days in New Mexico.
Merry Christmas,
Larry

3 thoughts on “Bosque Was A Blast!”